Michigan’s secondary situation just got way, way scarier. This from The Wolverine:

Multiple sources have informed TheWolverine.com that senior cornerback Troy Woolfolk suffered a lower leg injury in practice that could end his season, though athletic department officials have yet to confirm.

Head coach Rich Rodriguez issued this statement this evening: “Troy Woolfolk suffered a lower-body injury during practice this afternoon and was transported to U-M Hospital with our team physician. We can’t comment further due to medical privacy rights.”

Woolfolk has not used his redshirt year, so he could opt to go that route and return next year.

Your starting corners are now J.T. Floyd and… Cullen Christian? Courtney Avery? Terrence Talbott? Tony Anderson? James Rogers? That’s three true freshmen, a walk-on, and a senior who has never sniffed meaningful playing time. There’s no way to sugarcoat this: it’s really bad. I’ll have more when we get some sort of confirmation on the injury and its implications.

UPDATE: The Free Press’s Mark Snyder apparently talked to Butch Woolfolk, former Michigan running back and Troy’s father, and the news is not good:

Hopefully, the fears of ligament damage are misplaced and Woolfolk can return to the field sometime this year. In all likelihood, however, he is out for the year and has a long road ahead of him before he’s fully recovered. This is obviously a huge blow for the team, and also to Woolfolk — my best wishes go out to him for a quick and full recovery.

UPDATE 2: The Detroit News’s Angelique Chengelis has more, and it gets even worse. I feel so bad for Woolfolk: 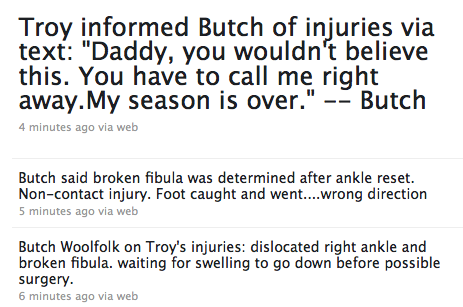 Keep Troy in your thoughts, and hope beyond hope that this isn’t another Antonio Bass situation.