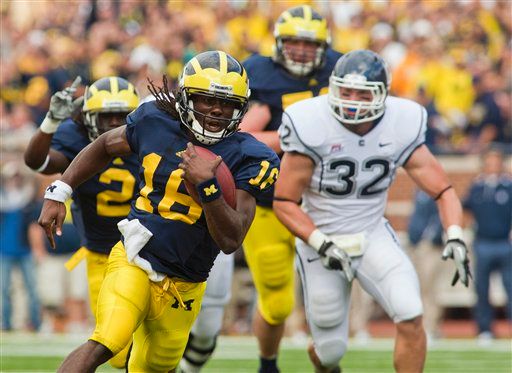 I spent much of Saturday’s game in Michigan Stadium convincing myself that this wasn’t just an elaborate ruse in which it would later be revealed that Dave Brandon was actually just playing an extremely high-tech video game and nobody was actually running for 197 yards while completing 19-of-22 passes, because those type of numbers only occur when you’re playing an overmatched opponent in NCAA 11 on the Playstation, anyway.

But, luckily, Dave Brandon’s evil genius only goes so far, and that really was Denard Robinson dismantling the UConn defense like he had accidentally left the difficulty on “Varsity” and could therefore do whatever the hell he pleased. At least, that’s what the papers keep telling me, and I’m inclined to believe them.

To watch a player go from connecting on just 14-of-31 passes for the entire 2009 season to systematically picking apart a Big East defense returning eight starters by not only out-running them, but accurately zinging passes downfield, is a sight to behold. There are no words to describe Denard Robinson’s performance on Saturday, because the English language doesn’t allow me to boil down “exceeded all expectations, both reasonable and unreasonable, while looking like evolutionary Pat White and leaving you standing agape at just how fast he plays, every time, even though you’ve already seen it 20+ times this game” into one word. In the future, we may refer to these type of performances as simply “Denard-like,” because even though it’s the first game and I’m trying my best not to get overly-optimistic, that’s just a dynamite football player unlike any we’ve ever seen don the Maize and Blue.

Of course, it wasn’t just Denard out there making plays. The offensive line gave an all-around stellar performance, giving Robinson time in the pocket and getting critical blocks up front and down the field to spring big run plays time and again. Vincent Smith and Michael Shaw did a nice job picking up yards when needed, and Smith especially looks like a solid threat both as a runner and receiver. The receivers caught everything that was catchable, which was practically everything, and they deserve credit for getting open and holding onto the ball — Denard, as far as we know, can’t throw the ball to himself.

And the defense? The unquestioned Achilles heel that was destined to turn every game into a shootout? They played a good, not great, game, which is better than anyone had hoped for and more than good enough with an offense that was moving the ball at will. Yes, there are some issues in the kicking game (namely, holding on field goals) that need to be worked out, and Notre Dame should be a more difficult test defensively, but for now, there’s no reason not to bask in a great victory and let some optimism creep in. There will certainly be bumps in the road, but it appears Michigan is on track to become Michigan again, under a coach whose system is finally being executed the way it was truly designed.

Get ready for Rich Rodriguez’s Virtual Reality Football, where quarterbacks warp downfield 15 yards at a time and crazy zone-read fake-screen passes turn into 43-yard gains when the entire opposing defense falls for the bluff. It should be a fun game.